Inflation is all over the news now. But what exactly does inflation mean? How is it caused? And what effects does it have on the economy of the country and the lives of its citizens? Read on to find out! 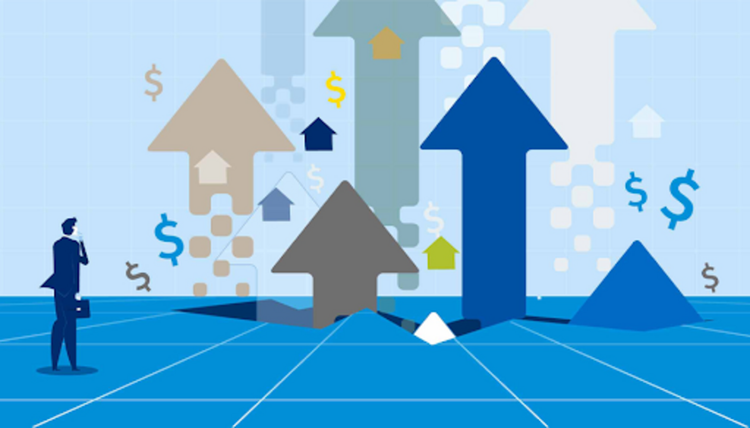 All economic news channels warn of high inflation rates in some of the world's biggest economies. In India, prices of fuel and other essential commodities have been skyrocketing. Due to the combined effect of the pandemic slump and international tensions caused due to the Russia-Ukraine conflict, the supply chain has been disrupted across the globe, causing a rapid increase in the rate of inflation. Let's look at how inflation works and what effects it has on the economy:

What exactly is inflation?

In a very crude sense, it is the increase in prices of goods and services. More specifically due to inflation, a unit of the currency ( say ₹1000 ) now buys fewer commodities than it did a year ago. This causes a dip in purchasing power and increases the cost of living. Inflation is caused when the money supply exceeds the economic growth i.e the amount of money circulating in the market increases, thus the value of the money decreases, and the prices of commonly used goods rise. 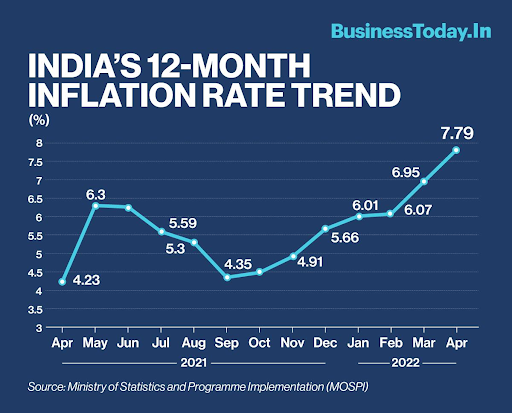 These are the major ways in which inflation happens: 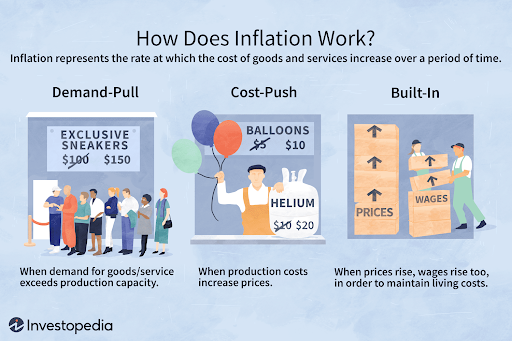 In any economy, the relationship between the demand and supply of goods is a deciding factor in prices. As the money supply increases, the demand for goods may increase faster than the production rate of the economy. This creates a demand-supply gap which leads to an increase in prices. When people earn more income, they will spend more, thus the increase in demand is often caused by a booming economy. In this case, the demand increases but the supply either remains the same or decreases creating an imbalance.

Companies that manufacture the goods might take some time to complement the supply to the increasing market demand. This may cause shortfalls( like the beginning of covid when it was almost impossible to find a single bottle of sanitizer at a reasonable price as everyone across the country was suddenly buying it.

When there is a disruption in the supply, while the demand either remains the same or increases, companies increase the prices of goods and services causing inflation. It is therefore the converse of Demand-Pull inflation.

Cost-push inflation is relatively rare but very relevant for commodities like fuel, which people can't avoid buying even when the prices are high.

The most relevant example of this would be the EU’s dependency on Russian oil and natural gas. The decline in the supply of pipeline gas from Russia has severely disrupted the supply, however, the demand remained almost constant and will only increase as winter approaches. This has caused an Energy Crisis.

This type of inflation is caused due to future expectations of inflation and is influenced by either of the above two types. When prices of goods increase workers demand higher pay to maintain living costs, however, an increase in their pay leads to a rise in production value. To maintain their profits, the companies then increase the price of goods. And therefore the spiral of built-in inflation is generated.

How does it affect us?

Inflation, be it of any kind, increases the cost of living, and unless people’s wages are incremented at the same rate, they will have to spend a higher percentage of their incomes on necessary day-to-day expenses, eating away at their savings.

Why then is inflation needed?

Despite the common perception that inflation has a negative impact on the lives of the common people, it is, in fact, essential up to a certain level.

Inflation encourages spending over saving. People expect the value of money to fall in the future, this gives them an incentive to spend the money today instead of saving today and spending later when its purchasing power will have reduced.

Suppose the inflation percentage per year exceeds the interest rate of savings accounts in banks, in that case, year after year the value of the money deposited in savings accounts declines, driving people towards high-yielding investments (like the start-up ecosystem) thus providing funds to the sectors of the economy where growth potential is evident.

How can a country control inflation?

The RBI maintains something called the Repo Rate which is essentially the rate of interest the other banks have to pay on the money they borrow from it, these banks then lend the money to the people at a slightly higher interest rate to gain profits. When the repo rate is low, the banks reduce their interest rates and it becomes easier for people to borrow money, this increases the liquidity and the money supply in the economy becomes higher. In case of undesirably high inflation, the RBI can increase its repo rate, subsequently, the interest rates of banks increase thus discouraging people from borrowing and reducing the money in circulation. This finally causes a reduction in the prices of consumer goods. And that's how the Reserve Bank of India can keep the inflation rates under check. 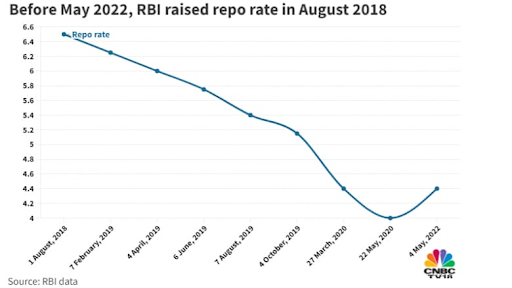 The most recent change in the repo rate was on 5th August 2022 when the RBI increased the repo rate to 5.4% to ensure that inflation remains within the target limit while still promoting economic development.

The introduction of numerous policies by the government to support small businesses and encourage the use of indigenous goods has made India a startup hub. India has surpassed the UK to become the 5th largest economy, and predictions suggest that it is expected to trump Germany by 2027 and Japan by 2029. Will India be able to maintain this sustainable GDP growth in the future? And how will this affect unemployment, poverty, and other related issues in the country?

Above the Fold: What's After College?