Above the Fold: What's After College?

No person in college would have an absolute answer to the question of what happens after graduation. If you are a startup enthusiast and you are lacking clarity on the possible paths in front of you... Read on :) 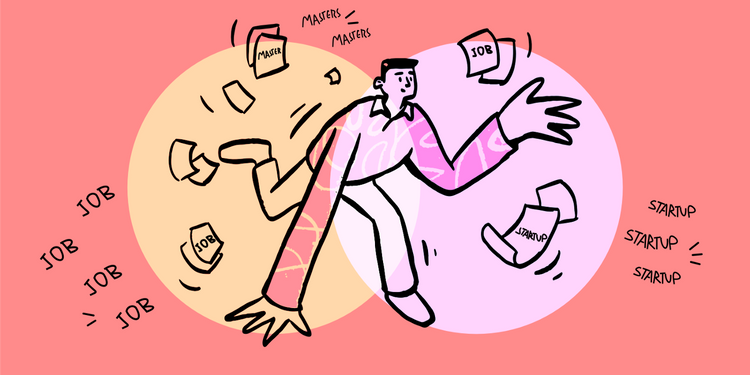 Last night, my friend asked me if I would go for campus placements two years from now. I lamely replied that I had enough to worry about in the present to actually think about the future. So then, I threw the question back at him (expecting an answer better than mine), and his reply is what brought me here to write this blog.

Like some of you, he intends to have his own startup one day. But the dilemma which keeps him up all night is whether he should go for a full-time work experience and then move on to his startup or begin with it while in college. Well obviously, I had no solid answer. But after surfing the net, I realized there were a good number of pros and cons for each side of the case.

Let me take you through the story of Steve Wozniak. He was Apple’s co-founder. During the time he and Steve Jobs founded Apple Computer Company, he was working under HP. After a day's work at HP, he would work on his Apple I which was the stepping stone of Apple. So from here it is evident that your entrepreneurial journey can have a rigid start along with a daytime job.

“So, when I finished designing calculators at HP in the daytime, I went home, watched Star Trek and then (worked on his computer projects.)"

But, what could you possibly gain from side hustling with a 5 to 9 job? Here is your answer:

It is important to take a job in the same field as your startup. By which you would be gaining experience that can be applied to your startup as well. But along the way you must not forget your ultimate goal which is to be your own boss in your own startup! You must not fall for the satisfaction of an average life which gives you money on a monthly basis. Most importantly, you must not lose the analytical, risk-taking entrepreneur in you.

You would be temporarily embedded in a corporate world with no problem solving or curious minds. Don't let that rub onto you! Just take what you need and leave when the time is right.

Now consider the case where you directly leap into the entrepreneurial world post-graduation. This is actually the time where your life has the highest risk tolerance. So, you can go ahead and do what you love the most.

But there are some things you must consider:

The worst scenario that must be considered is the failure of your startup. This might lead you to search for a 9 to 5 job. The disadvantage you would have is that your resume will contain no work experience and to top that a failed startup. But needn't worry! We have Mark Zuckerberg and Bill Gates to tell us that this is a viable path. There were a few things that these guys had in common. One, was that they dropped out of college (Harvard!). Two, they were from a rich background ensuring them financial stability and the freedom to take risks.

Going a bit more deeper into Bill Gates' story, the idea of starting a computer software company came to him after working the summer at Honeywell. After some serious considerations, he decided to leave Harvard. But he always knew he could go back to school in the case of his idea failing. We all know what happened after this, his idea came to life (strong and healthy) in the form of Microsoft.

At the end of the day, it is you who has to decide what is best for you based on your background and ability. Analyze your assets. Make not one, but several plans with a timeline. Document all the steps. Keep talking to people and finally the day will come where the path seems clear and everything will soon be settled.

Above the Fold: Strengthening Financial Foundations